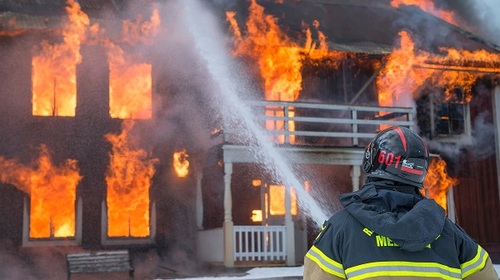 The increasing need for disaster response is down to one simple and depressing fact -- these instances are becoming increasingly common. Climate change means that extreme weather is now the "new normal." Shifts in weather patterns have led to more intense heat waves, droughts and wildfires; increasingly severe storms, flooding and hurricanes; and more severe winter temperatures. Over the past three years, the average number of billion-dollar disasters in the US was more than double the long-term average.

Parts of the world that never used to have to deal with extreme weather now need to think about it, while those that are more used to these extreme events are going to need to prepare for more. And while this preparation may include flood defenses, controlled burns and building homes and infrastructure that can better cope with these extremes, there is also a need for better coordinated disaster response. Key to this is, of course, communication.

Preparing a slice for disasters
A great deal of the hype around 5G is misplaced, focusing on the benefits for the consumer and the availability of handsets, rather than some of the more "under the hood" features that will make a much bigger difference.

One such feature is network slicing. Every service that uses a mobile network has to share that network, but the capacity, latency, security, duration, reliability, power consumption and geographic coverage that suits one service may be totally different from the needs of another. So, for example, video requires a lot of capacity but doesn't require low latency. Automotive applications, on the other hand, may require low latency but nowhere near the same amount of capacity.

5G network slices will instead create individual virtual networks that can be optimized for different services -- including a slice, or slices, set aside for emergency communications. This coordinated management relies on the cooperation of the different organizations of the first responders, weather forecasters and the service providers. While this coordination may not exist today, 5G could be a part of enabling it.

Communication is critical immediately before, during and after a crisis, and enabling emergency response teams to coordinate and share critical data can literally make the difference between life and death. Network slicing means that not only is that possible, but that these slices can be adapted to meet the needs of specific types of emergency communication. For instance, a firefighter might need a dedicated low latency slice for mission critical push to talk communications (MCPTT), while a Hazmat team might need a slice optimized for IoT to transmit the readings of carried connected gas meters.

First responders also now commonly wear bodycams or helmet-cams, and can carry wearable health sensors to track body temperature, heart rate, motion, etc. All of this data, plus real-time data from weather maps, satellites, radar, weather stations and social media can all be critical to emergency response. To transmit, correlate and analyze all of this data in real-time could require the need for the provisioning of additional slices.

Plus, the creation of virtual networks by their nature keeps traffic separate from less critical data. Emergencies will generate significant traffic, as people try to reach friends and family, people check in to Facebook to mark themselves as safe, or post dramatic photos and videos to social media. But this separation of traffic doesn't automatically guarantee service for emergency communications.

Assuring emergency communications
Once these slices are established, then managing all this network complexity comes with its own challenges. There is a growing need for dedicated service assurance with the ability to oversee and analyze every event within its specific context, and provide enhanced monitoring capabilities for each slice. But this analysis and response needs to be automated and proactive.

The complexity of 5G and the fast-moving nature of disaster response means there is no time to manually respond to problems in the network to overcome them. Manual response is no longer tenable -- and while it's true that there is an increasing amount of automation of service assurance by mobile operators, simple forms of automation aren't going to cut it any more.

5G is different from previous network generations, in that so many new technologies and architectural innovations are being introduced at the same time. While many of these will help create a network that can be relied upon during disaster response, this new complexity means we need new tools to examine the network. Machine learning, for example, can identify patterns and be part of the shift from fixing issues to detecting underlying issues -- even those that don't linger in the network for long. This can trigger automated responses to proactively resolve specific issues within individual network slices -- and the services they are associated with, making sure that emergency communications stay viable.

5G is arriving at a time when emergency communications is needed more than ever, as what we consider extreme weather becomes an everyday threat. The new generation's feature set makes it possible not only to support emergency response, but also create virtual network slices for use in those emergency situations. But these new networks also need to be supported in new ways -- simple automation isn't good enough. Emergency communications, more necessary than ever before, will only be able to rely on 5G networks if those networks have intelligent support.