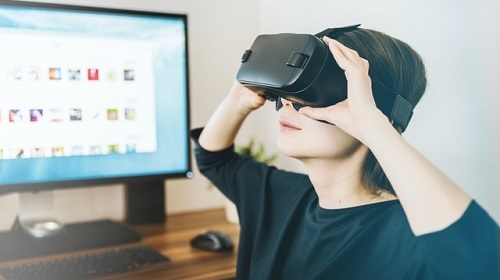 We are on the verge of a digital content revolution. The mass adoption of immersive technologies stands to mirror or even overshadow earlier innovation eras in technology and communications. The rise of 5G, edge computing, and Virtual Reality (VR) will enable the next stage of the experience evolution.

VR is a computer-generated, simulated experience that places users in immersive 3D environments. With current 4G technologies, people face lagging when streaming content from their smartphone. But with the new-network capacity for 5G, creatives and consumers can swap the linear video or song for an entire interactive virtual world. Current multi-user networked VR experiences, or social VR, are limited to low-poly, or low graphic, designs.

Attempting to stream multi-user high-quality VR experiences on current 4G capabilities is nearly impossible. I sometimes struggle to get a 1080p HD video to load on my phone and I cannot fathom streaming a full VR experience with current 4G limitations. Even Augmented Reality (AR), which overlays digital elements into a physical world, is data intensive. As Forbes reports, "one minute of AR will consume 33 times more traffic than one minute of 480p video."

5G brings lower latency, or a faster way for data to transfer between networks and devices. An ABI Research study commissioned by Qualcomm predicts that 5G will decrease latency by 10X. Lower latency enables higher data rates, which means VR experiences will be streamed in real time, rather than downloaded beforehand. Additionally, the advancement edge-computing, a distributed computing framework decentralizing data processing, means consumers will have smaller and thinner devices.

Streaming immersive experiences require a lot of data to be processed. With low latency, incredible speed, and massive capacity, 5G and edge-computing will be game changing for VR. The higher throughput of 5G will enable users to stream instant VR content from the cloud. Not only will content load faster, but developers will not be as tied down by current game-engine to headset optimization limitations. 5G will enable the next level of interconnected, immersive experiences. Developers and designers will soon have an entirely new canvas to create their dream experiences.

Strapped in our VR headsets (or thinner smart glasses wearables), information, objects, and people will be all around us. Instead of passively staring at the screen or waiting for environments to load, VR users will be engaged in the next era of content consumption: "storyliving" rather than storytelling.

Photo by JESHOOTS.COM on Unsplash.